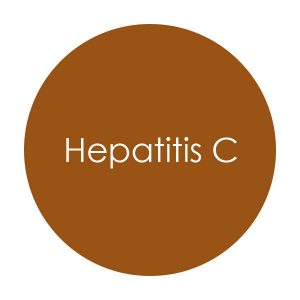 This hepatitis C test screens for antibodies to the hepatitis C virus (HCV). If antibody activity is detected, a confirmation test will be performed automatically.  Hepatitis is characterized by inflammation and enlargement of the liver.

The hepatitis C virus is spread through contact with blood or other bodily fluids and is highly contagious.  Those who share needles for drug use or engage in unprotected sex are at a high risk of contracting the disease.  In the early or acute stages of the disease there may not be symptoms.  Many people have no symptoms and carry the disease for the rest of their lives, exposing others to it and potentially causing severe liver damage and inflammation leading to cirrhosis or hardening of the liver or liver cancer.  About 25% of people with HIV have an HCV co-infection and liver disease is likely to progress at an accelerated rate.

This test is performed when a hepatitis C infection after a possible exposure or when symptoms of hepatitis are present. The CDC recommended hepatitis C screening for high-risk groups including, but not limited to, anyone who has injected drugs, health care workers, those who have received a blood or organ transfusion prior to July 1992. The CDC also recommends that all baby boomers – the generation born between 1945 and 1965 – receive a one-time hepatitis C test.

The CDC advises the following groups be tested for hepatitis C:

The majority of people with acute or chronic hepatitis C will never develop symptoms. When present, symptoms may resemble the flu and include:

Hepatitis C may be treated with antiviral medications, but the treatment is not always effective.  HCV antibodies may not be present until several weeks after infection but will always be present in the later stages of the disease.

Why Do I Need It?

If you were born between 1945 and 1965, believe that you have been exposed to the hepatitis C virus, have symptoms of liver disease or are in a high risk group, you should be tested.  Those at an increased risk of exposure include those who have received a blood transfusion or organ donation before 1992, men who have sex with men, IV drug users, health care workers and those with HIV.  Untreated and unresolved hepatitis C can cause long term damage to the liver including cirrhosis and liver cancer.

A negative test result indicates no infection is present or it is too early after exposure for the test to be accurate.  If exposure is suspected retesting is recommended.